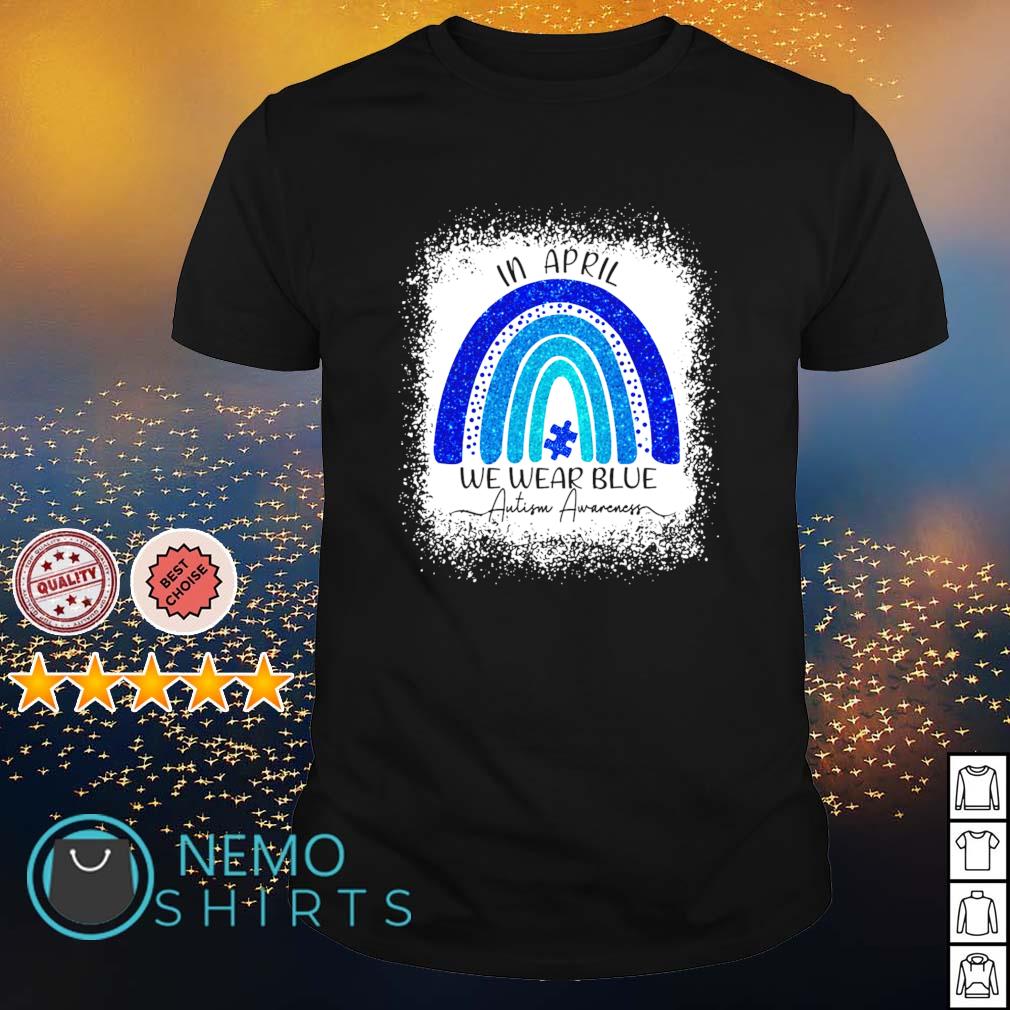 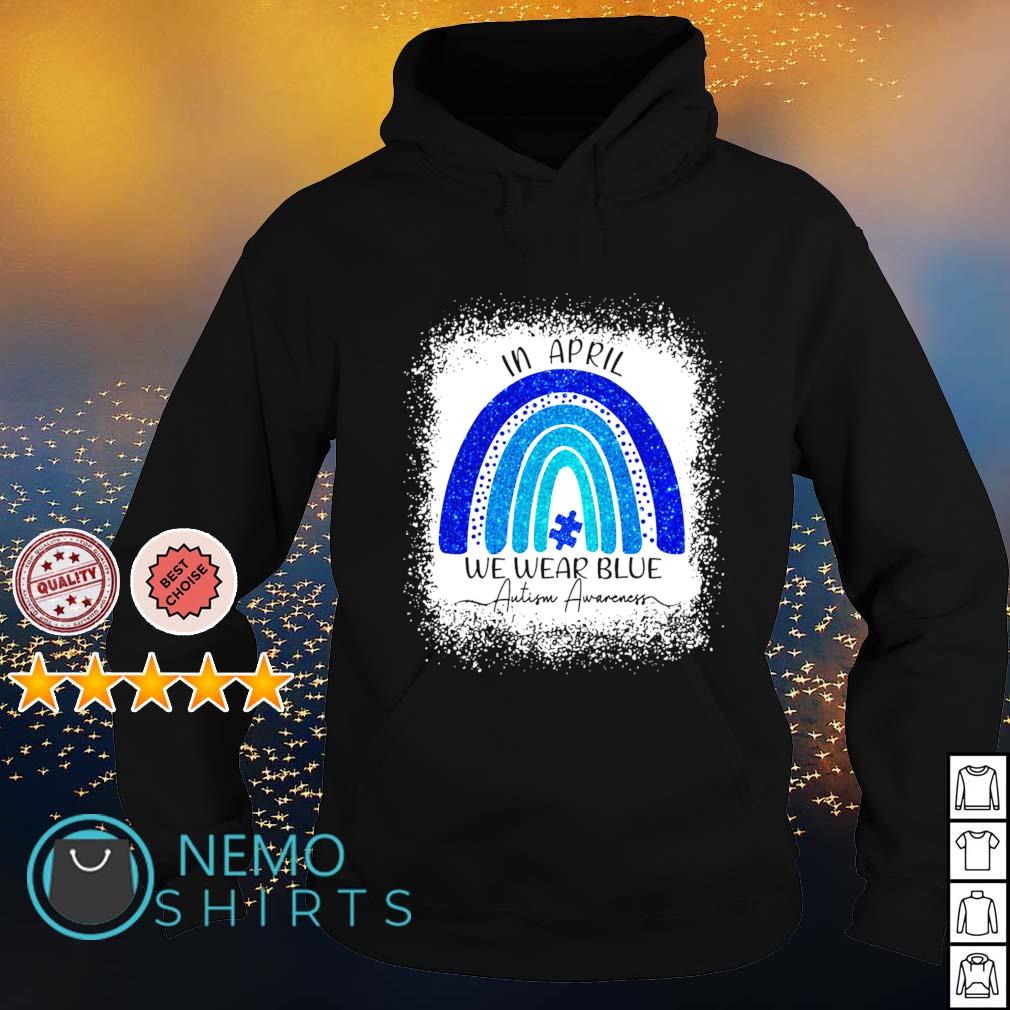 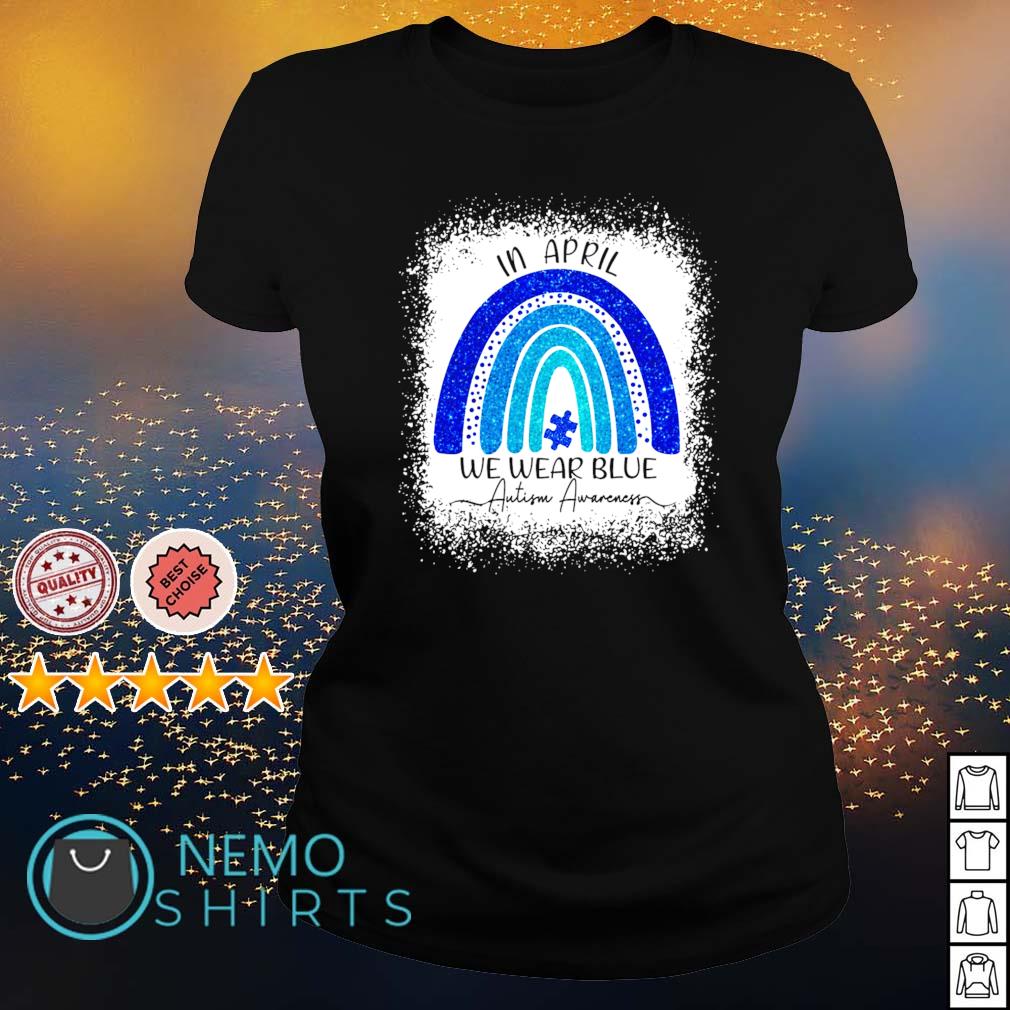 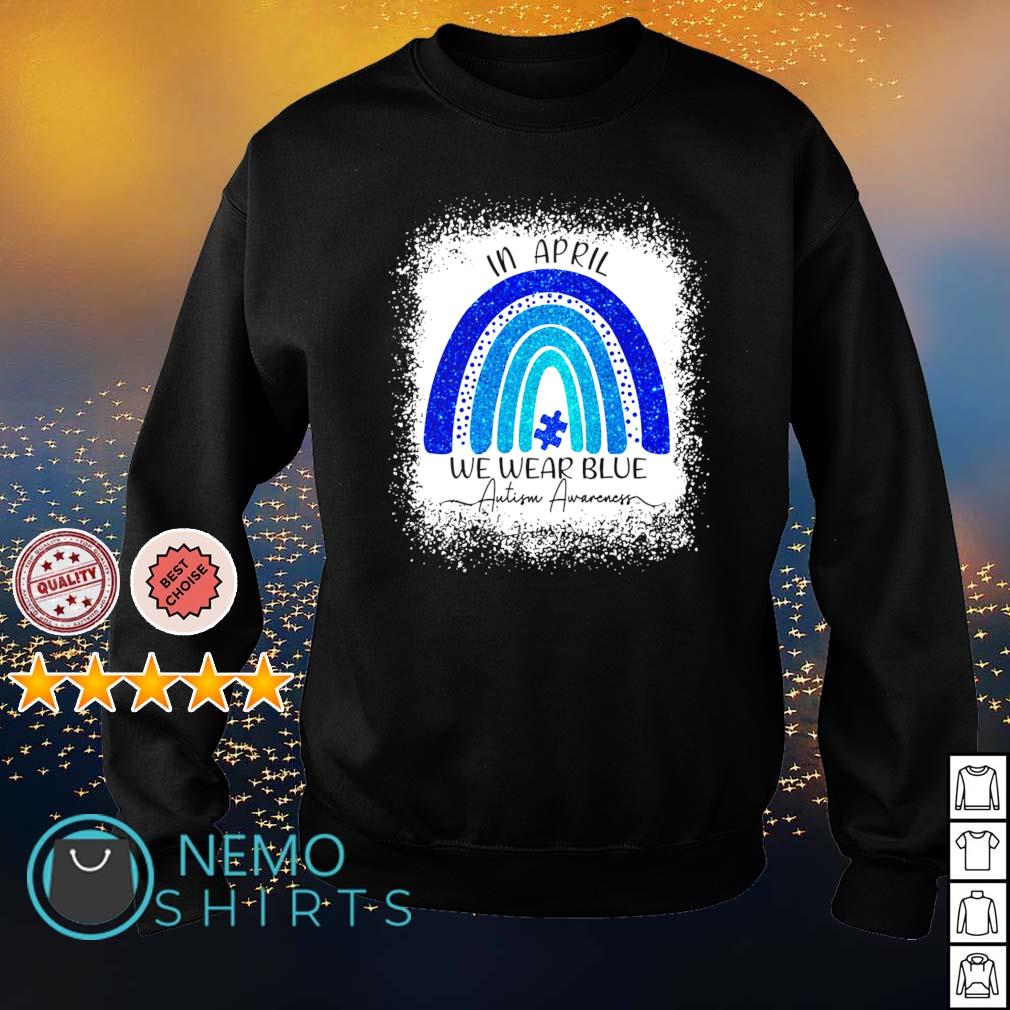 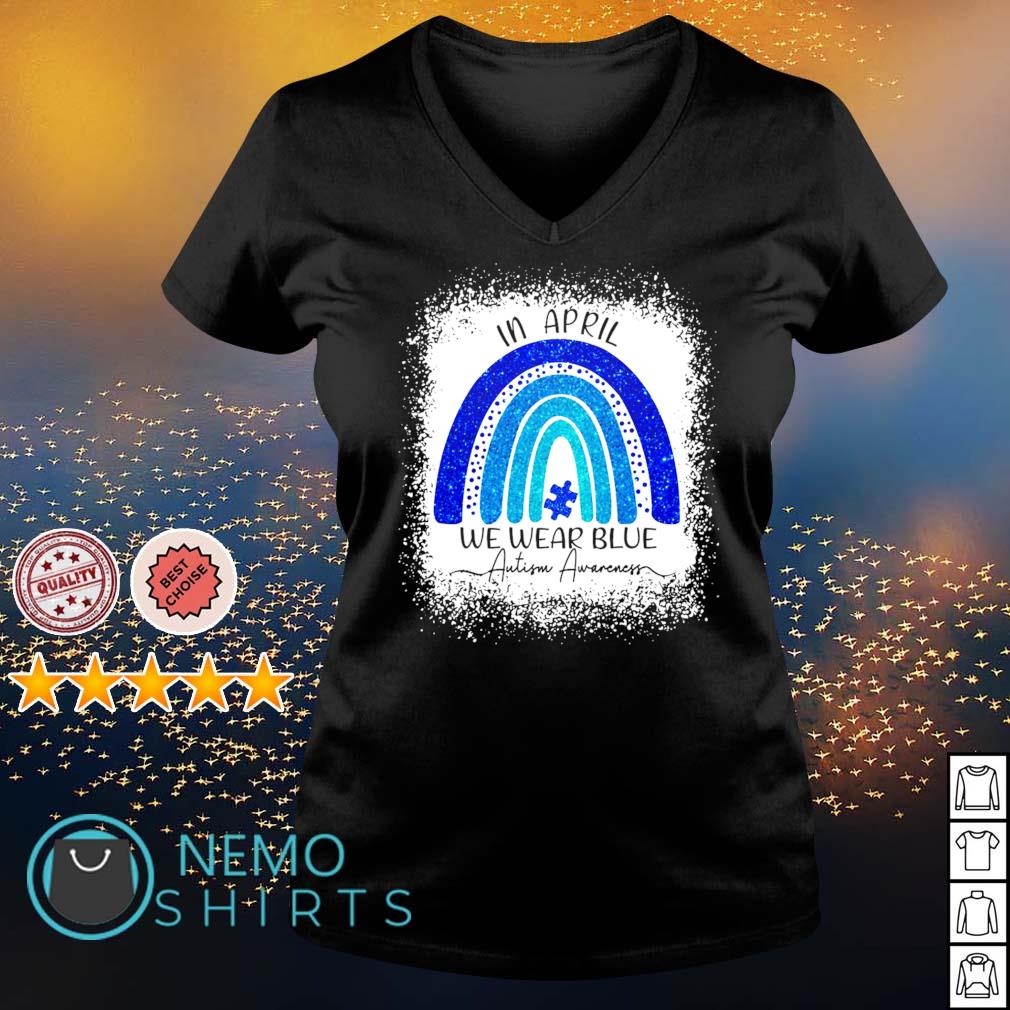 Several days later I receive an email apologizing for the In april we wear blue Autism Awareness shirt it is in the first place but “confusion” that occurred during my last visit along with a voucher for 10% off my next online purchase. There really is no way to avoid this retail chain because they’re everywhere but I have not shopped at that particular store in the seven months since the incident, and I refuse to purchase anything from them except for grocery items. The first clue was that the front door was locked when I got home from work one day and I had to go around to the back door to get in. We didn’t usually lock the house, which I know sounds irresponsible, but we had a couple of pretty fearsome dogs at the time and the house sat in the middle of a fenced lot. A stranger couldn’t come anywhere near the house without getting through the dogs. (Also, we were pretty poor and I figured anyone willing to come through the dogs for what little we had, needed it more than I did. And the door wasn’t really ‘locked,’ the lockset had a malfunction where if, when leaving the house, you turned the interior knob clock-wise it jammed the lock and the front door then couldn’t be opened from the outside. Open the door by turning the knob counter-clock-wise and everything worked fine. We were all used to this quirk and it wasn’t a problem. So the question was “Who last opened the front door that would have made that mistake?” There was no satisfactory answer. A day or two later, I was vacuuming, and in the front hallway, just inside that same front door, was a small gold decorative pin sort of thing. When asked, no one claimed any prior knowledge of having seen this item. Again odd, but I did share the home with two teenagers, and you get used to odd. A week or so later … while dusting shelves in the living room I find a photograph face down of a bride and groom posing with a bicycle. I don’t recognize them, and set it aside to ask who it belongs to (and to have them keep it in their own room). But I do look again, and darned if it isn’t Michael! Michael, who I had never seen without a beard before this photo. Michael who I’d had a five year relationship with, but dumped five years prior (for some very good reasons, but none of which were that he was a scary, break into your house kind of guy).

When I walked out on my father’s arm, I was so happy and excited, I was almost in tears because I couldn’t wait to see the In april we wear blue Autism Awareness shirt it is in the first place but person I was pledging to spend the rest of my life with, and see how excited and happy he was, too. (I seldom wear makeup or dresses, and I was dressed to the nines that day, too. Laced up corset, beaded and ruched bodice, modest train, tastefully simple makeup, curled hair with sparkles throughout to match the bodice…) And admittedly, I wanted to knock his socks off with how splendid I looked for him on our special day, too. So I walked out with my father and saw him standing at the altar, hands clasped in front of him, groomsmen standing behind him in a neat row, and that was the neatest thing ever. Halfway down, he hadn’t moved an inch. Closer still, and he has a look of absolute boredom on his face. A few steps closer, he gives the barest, thin-lipped smile when he sees me, and I just…died inside. I thought maybe I’d done something wrong the day before and he was still upset, maybe my makeup had smudged and I looked ridiculous, maybe he just…didn’t like the whole thing. I was in my favorite Mexican restaurant when a woman at a nearby table summoned the waiter, pointed to her plate, and said, “This was terrible, I’m not going to pay for it!” The.plate was almost empty except for a few crumbs of a burrito supreme, so if it was terrible (actually, it’s what I order almost every time I eat there), she certainly made a heroic effort to choke it down. More so than even my own, half-remembered camp experience, what I really can’t help romanticizing is summer at Camp Walden, the summer camp that separated-at-birth twins Annie and Hallie attend in the 1998 classic The Parent Trap. The film’s stars celebrated its 22nd anniversary with a Katie Couric-moderated Zoom, which was heartwarming as all get-out, but all it really did was make me long for a summer of lake swims, archery, and spreading peanut butter on Oreos. (Do Annie and Hallie spend a significant portion of their time at camp in the ominously labeled “Isolation Cabin”? Yes, but that’s not the part I’m longing for.)